Pupilloplasty in a patient with true polycoria: a case report

Here we report a case of surgical pupilloplasty in an adult with true polycoria. A 44-year old man was referred to our clinic with a best-corrected visual acuity (BCVA) of 0.5 diopters (D) in his left eye. Biomicroscopy revealed two pupils within a 2.5-mm central zone, with diameters of 1.2 and 1.1 mm. Both pupils had real iris sphincters and responded to light and chemical stimulation. Therefore, we surgically cut the bridge between the two pupils without any intraoperative or postoperative complications. One month after the surgery, BCVA had improved to 0.9 D, and the final pupil was almost round, measuring 2.7 mm in diameter.

The prevalence of true polycoria is extremely low(1,2), and the mechanism underlying its development remains unknown. A few theories have been proposed to explain the phenomenon, including segregation of a portion of the pupil margin, partial closure of a coloboma, and differentiation of neural ectodermal cells into muscle fibers in abnormal situations(3-5). Only a few cases of true polycoria have been reported in the literature, some of which have been associated with polar cataracts, glaucoma, and retinal detachment(3,6). Although most patients with polycoria are not surgically treated because visual acuity is not significantly affected, dimmed vision can be an issue for some. In this report, we aim to present the details of a patient with true polycoria, who complained of a low vision quality and requested treatment for this condition, and to describe the surgical pupilloplasty procedure we performed for its correction.

A 44-year-old man was referred to our clinic complaining of poor vision in his left eye that had been present since childhood. He had no history of trauma or ocular surgery, no abnormal obstetric history, and no other systemic conditions. On examination, his best-corrected visual acuity (BCVA) was 1.0 diopters (D) (-1.00, -1.75, 105º) in the right eye and 0.5 D (-4.25, -1.75, 105º) in the left eye, with intraocular pressures of 16 mmHg and 17 mmHg in the right and left eyes, respectively. Specular microscopy revealed 2,817 cells/mm2 in the right eye and 2,882 cells/mm2 in the left eye. Fundus examination was normal in both eyes, as was the right pupil, which measured 3 mm in diameter (Figure 1 A). However, there were two pupils in the left eye within a 2.5-mm central zone and measuring 1.2 and 1.1 mm in diameter (Figure 1 B). Both pupils in the left eye had a true iris sphincter and pigment epithelium. Direct and indirect pupillary reflexes were normal in both eyes. After the application of tropicamide 1% drops, both pupils in the left eye dilated (Figures 2 A and 2 B). 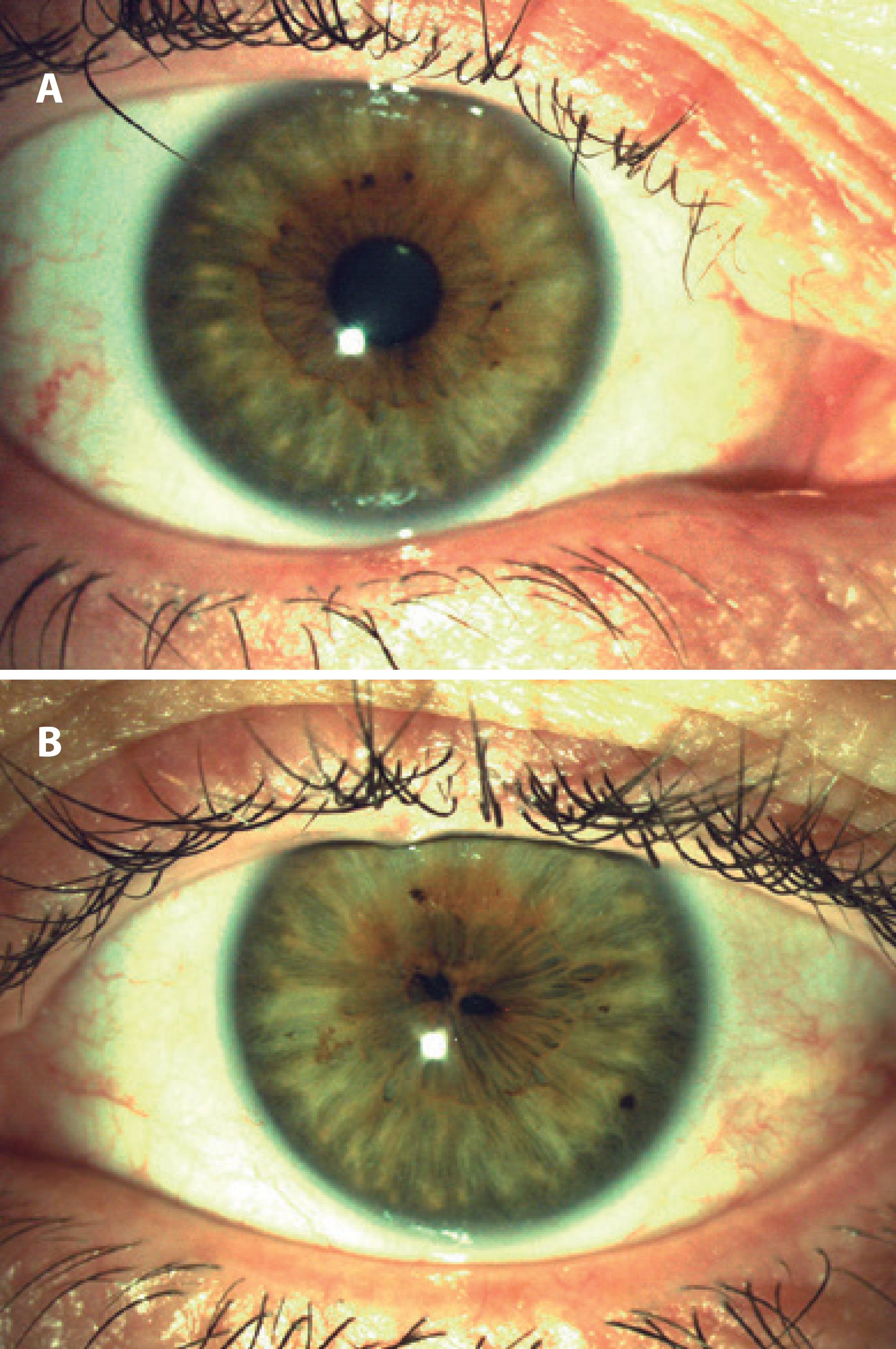 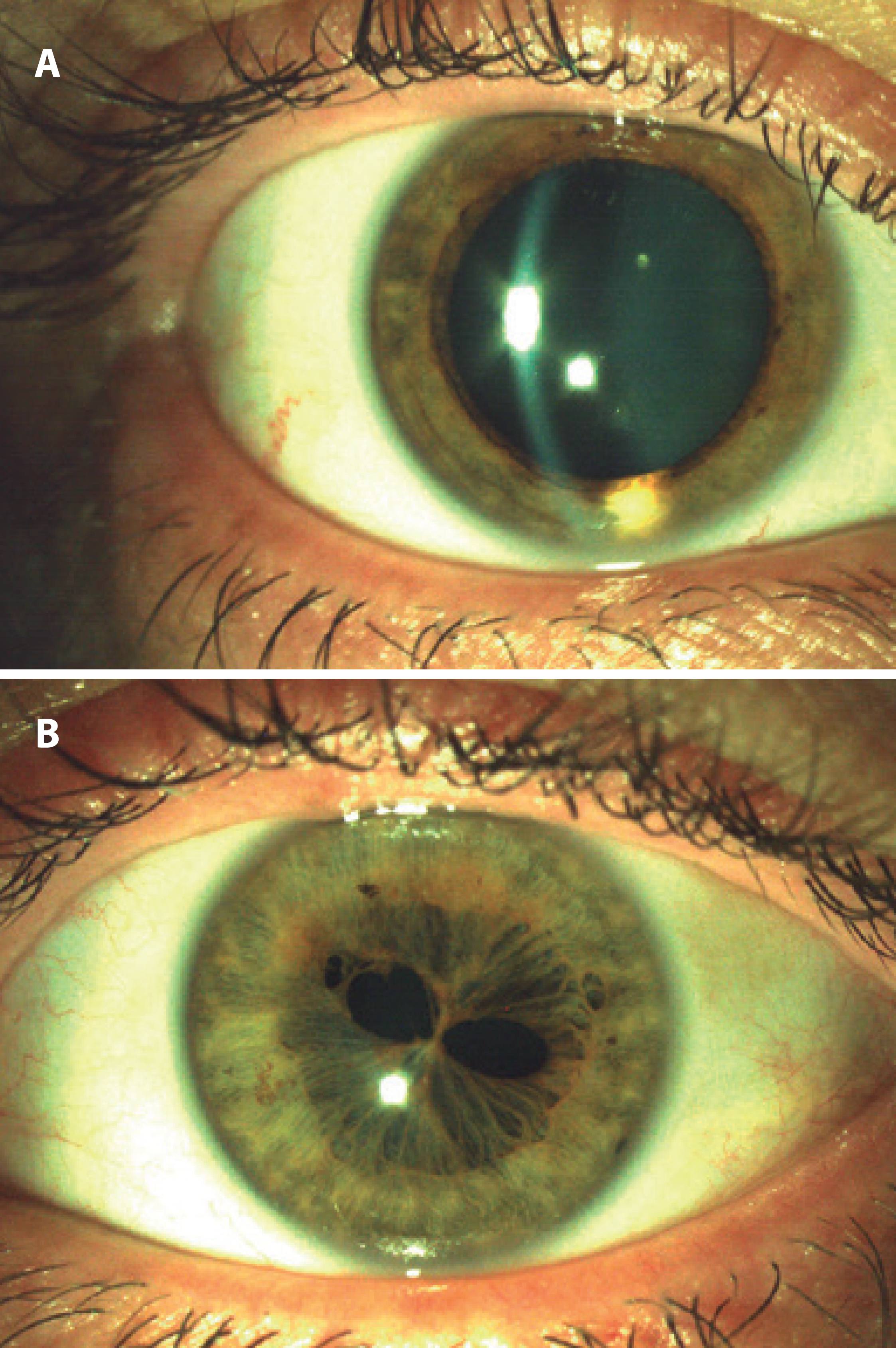 We performed pupilloplasty under retrobulbar anesthesia after the pupil was dilated with 1% tropicamide. Following two 1-mm limbal incisions, the anterior chamber was filled with viscoelastic material, and a spatula was inserted through a side port. The iris tissue between the two pupils was then elevated with the spatula to avoid contact with the lens. We then cut the iris tissue using vitreoretinal scissors inserted through the other side port (Figures 3 A and 3 B). After aspirating the viscoelastic material, limbal incisions were closed with stromal hydration, and the operation was completed with the application of intracameral cefuroxime. No serious intraocular inflammation was reported during the early postoperative period. Postoperatively, the patient was treated with antibiotics and steroid drops for 4 weeks. At the first follow-up 1 month after surgery, the BCVA had increased to 0.9 D (-3.75, -2.50, 95º), the intraocular pressure was 18 mmHg, and the lens was clear. The pupil was almost round and measured 3.5 mm in diameter on the first postoperative day (Figure 4 A), but had reduced to 2.7 mm one month after the surgery. The patient was satisfied with his improved vision and better quality of life. 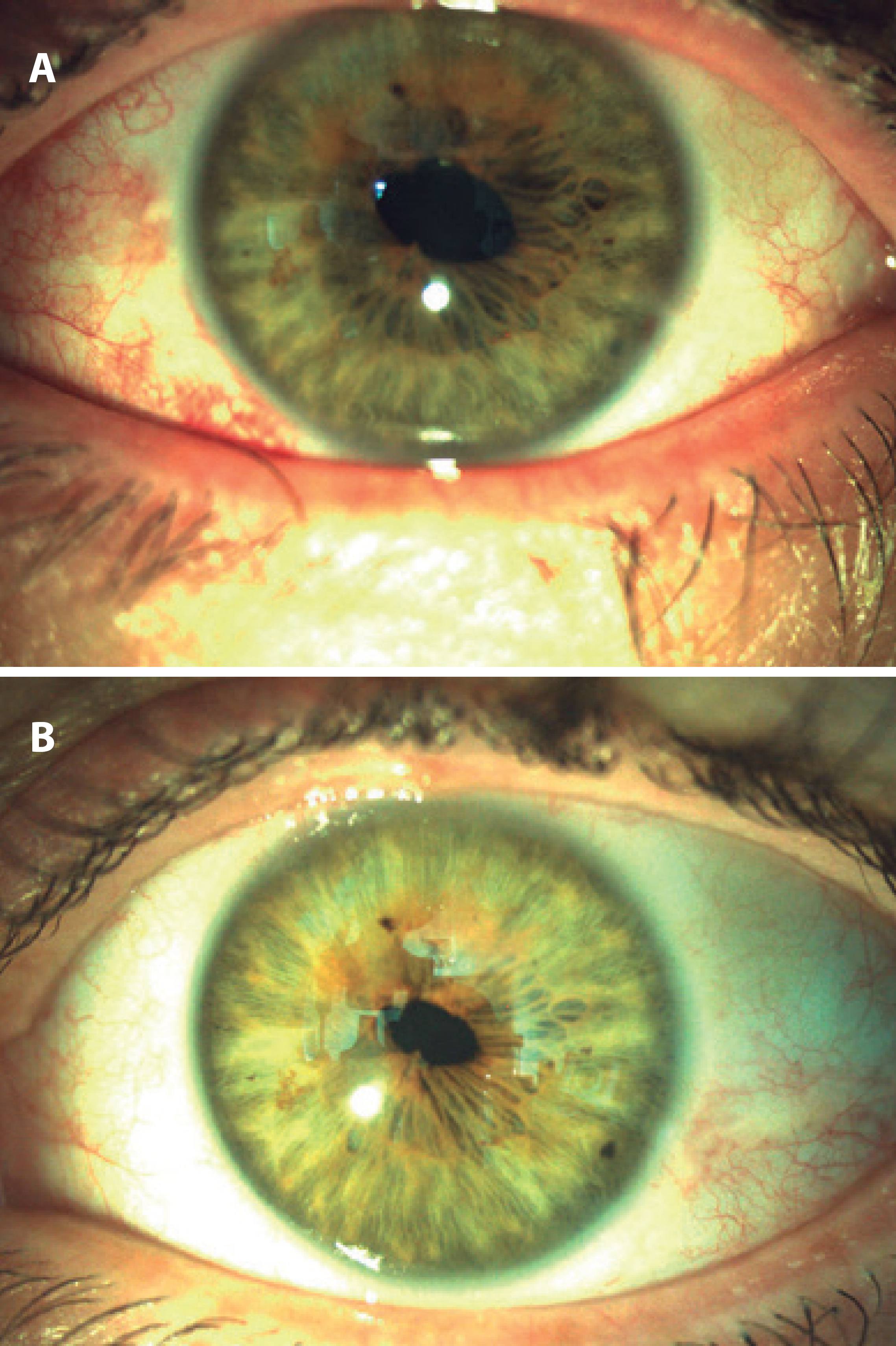 Pseudopolycoria is distinguished from true polycoria by the passive constriction of the accessory pupil when the true pupil is dilated(5) and is characteristic of essential iris atrophy that can be associated with Seckel syndrome, posterior polymorphous dystrophy, and juvenile glaucoma(7-9). In contrast, the extra pupil in true polycoria retains an intact sphincter muscle, is reactive to light, and synchronously contracts and dilates in response to medication(3). These findings were observed in our patient, supporting the diagnosis of true polycoria. Although extra pupils typically present at some distance from the principal pupil(2), the extra pupil was within a 2.5-mm central zone in our patient.

Polycoria can decrease visual acuity. In one previous case report, a patient with true polycoria was noted to exhibit dimmed vision and decreased retinal illumination. Both these phenomena can be explained by the Airy disc effect or diffraction rings and interference fringes induced by the second pupil(5). It has been reported that, in true polycoria, visual acuity linearly decreases with pupil diameter for pupils with diameters >1.5 mm(10). This trend may account for our patient's visual acuity of 0.5, considering that his pupils measured 1.2 and 1.1 mm in diameter. Although our patient was displeased with his low vision before surgery, he did not complain of either diplopia or glare symptoms. In our opinion, if his pupils had been spaced together more closely, he may have experienced these conditions. It was rewarding that his visual acuity increased following surgery and that he was satisfied with the outcome.

In conclusion, we have shown that a pupilloplasty procedure for true polycoria was effective in our case. However, the efficacy of the procedure remains unknown in the wider population. We anticipate more case reports to validate our surgical approach in cases with true polycoria.

Funding: No specific financial support was available for this study.

ABO is licensed under a Creative Commons Attribution-NonComercial 4.0 Internacional.